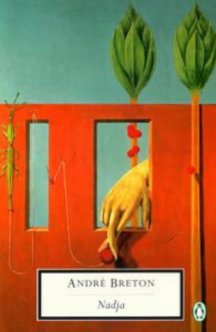 This book has often been described in things that I have read, but these descriptions seemed to bear remarkably little in common with what this book actually contained.

Who am I? If this once I were to rely on a proverb, then perhaps everything would amount to knowing whom I “haunt.” (11)

I read that sentence knowingly, thinking glibly that by haunt he really meant “stalk”, of course. But this was not in fact a tale of Breton’s stalking a woman through Paris streets (though their passage through streets is charted by street names and monuments and pictures of Paris to the delight of psychogeographers). It could be titled André, as it has far more to do with his own obsession with self and the encounter with Nadja sits sandwiched as a section between other thoughts and odd coincidences and naming of friends and enemies along with their pictures and other meanderings of surrealist nature, and a long passage on a woman and her gloves — another female object of a long-term affair. While Nadja seems to perceive him as another man who will protect her from destitution and seeks him out as such, André remains the principal subject to himself.

Do not expect me to provide an exact account of what I have been permitted to experience in this domain. I shall limit myself here to recalling without effort certain things which, apart from any exertions on my part, have occasionally happened to me, things which, reaching me in unsuspected ways, give me the measure of the particular race and disgrace of which I am the object…(23)

He takes pleasure in the reactions of other men to Nadja’s attractiveness, exoticises uncomfortably her appearance as well as calling on racist tropes. The waiter keeps hovering over her on the Quais Malaquais, in the restaurant Delaborde and Breton writes:

Nadja is not at all surprised. She knows her power over certain men, for example, over Negroes who, wherever she may be, are compelled to come and talk to her (99).

Ugh. Then there is Breton’s soliloquy on women and the street, quite as uncomfortable. It is part of the tradition that assumes the female wanderer of the streets as prostitute (if such a tradition yet existed as spoken aloud rather than simply held axiomatic), but here it holds a twist. Here some women they can only live and experience that life fully in the street. Through the gaze and actions of men.

I mean, is the real Nadja this always inspired and inspiring creature who enjoyed being nowhere but in the streets, the only region of valid experience for her, in the street, accessible to interrogation from any human being launched upon some great chimera, or (why not admit it) the one who sometimes fell, since, after all, others had felt authorized to speak to her, had been able to see in her only the most wretched of women, and the least protected? Sometimes I reacted with terrible violence against the over-detailed account she gave me of certain scenes of her past life, concerning which I decided, probably quite superficially, that her dignity could not have survived entirely intact. A story of a blow in the face that had drawn blood, one day,in the Brasserie Zimmer, a blow from a man whom she gave herself the sly pleasure of refusing simply because he was low–and she had cried for help several times, though not without taking the time, before disappearing, to bleed all over the man’s clothes–this story, when she was aimlessly telling it to me, early in the afternoon of October  13, almost managed to alienate her from me forever.  (113)

Is Breton’s violence in thus defining her any less than that of the man who hit her? Being always inspired and inspiring must be quite demanding.

He seeks to deny her any outside reality from this existence in the streets, but only in relation to men like him ‘launched upon some great chimera,’ her role simply to facilitate that search. He is uncomfortable with the other side of this existence in the streets. She seems to define herself here through her ability to reject some men’s advances because she is above them. A right of rejection that should belong to all women, with nothing sly about it. To Breton she seems to take almost a pleasure in their violence, her vengeance through bleeding on them. Such a sad paltry kind of vengeance. I tired of his self-obsessive interpretations of her, wished for just a moment to see her as she was. She tries to tell us but Breton does not wish to hear it, wants nothing to do with what she does or who she is or what she faces in life when not with him, nothing of the hard edges of survival and the things that it requires. It is too close to his own mingled desires perhaps. He fears her life’s ugly realities, refuses to think about them, prizes only the strangeness which cushions him, preserves him from poverty and violence. And day to day bodily functions.

…I was also increasingly alarmed to feel that, when even I left her, she was sucked back into the whirlwind of ordinary life continuing around her and eager to force her, among other concessions, to eat, to sleep (115).

He is also alarmed by her mental illness. He distances himself from her as this becomes worse, as she becomes more needy and thus more and more human to him, more flesh and blood, less enigmatic and charmingly strange. He notes her disappointment when they first meet and he tells her he must return to his wife — she will only ever be a curious sideline to him, while it seems (and how can we really know) he is all she has both emotionally and for his monetary support for physical survival — he is uncharmingly open about the money her gives her. At the end she calls his wife and tells her they are the only friends she has.

This poor unnamed wife that Breton always uses as an excuse when Nadja demands too much. When she begins to bore him with her actual thoughts and her actual needs. Her only friends?

Bad luck to her, because they abandon her after she is committed — though you can hardly blame the wife. She has enough on her plate with Breton.

My general contempt for psychiatry, its rituals and its works, is reason enough for my not yet having dared investigate what has become of Nadja. I have indicated my pessimism as to her fate…

Is it really reason enough? Others Nadja met through Breton did not do the same, but no one was able to really help her.

To label this a romance seems to me cynical beyond anything, an acknowledgment of the emptiness of surrealism and this vision of art and its life when real humanity was required. This haunting he refers to in his first paragraph is is the absence of soul, of heart. It is the vacuuming up of the lives and experience of others to discard them, leaving only their husks as its playthings. Just as in the play he describes at such length in the first chapter, Les Detraques [The Deranged], where two women feed off of and kill their students, though you are never quite sure how.

Bender as you have never seen him before