I’m loving Concrete Park, fucking loving it. Not least because it’s got a map, and these geographies are so familiar:

Looks hell of familiar, as do the faces and the slang and the ways of being of most of the folks in these new graphic novels. The need to name them all off, to describe a wide cast of players and the power they wield over their little piece of the city they have built — a little confusing, but it makes it feel more real because of that I think. That familiarity again, the kind too many of our kids’ survival depends on as they navigate their city.

I was worried it was all a little too familiar, I mean, you imprison all these people from inner city LA and similar neighbourhoods from cities all over the world and ship them off to work as slaves in the ice mines and they reconfigure the gang culture they all grew up with. A little fucking sad of us, right? All that same old shit about turf and respect and power and product, like there’s nothing else for us. But a lot more mixed up, a crazy diverse slang that brings together hindi and arabic and spanish and cantonese and more because of how people were mixed up together working the mines and their loyalties shifted just a little…I love that, you know I love that. Still, there is initially nothing outside this world of gangs — both the good and the bad of them. The way they take care of their own, the way they kill each other. Nothing outside of them except cops.

It’s pretty descriptive of reality for a lot of kids, and some of those adults that keep wearing their tube socks up to their knees and their pants sagged and hobble up the hill home, their bones all tired from methadone. I guess all those veteranos died in the mines, or back on Earth.

Anyway, I like that Erika Alexander and Tony Puryear are writing  something that will take us beyond that. Same old on a brand new planet — that’s how it starts. But all that’s about to be radically challenged by a world of crazy technology and older gods, older magics. It’s also about to run out of food and water, get cut off from its supplies and that looming environmental catastrophe is pretty damn familiar too.

And then from page one there’s been a voice calling for rising above all that shit, creating a new world better than the old. Is Chavez named after Cesar or Hugo or both? Is this voice on the radio talking up the revolution for good or ultimately evil?

Who knows, but damn I’m looking forward to the third book. Especially as the ladies are kick-ass in here, my only wish that they challenged a little more than white stereotypes of beauty. But I suppose it’s all right that everyone is hot … as is the website, with translations of the robot’s speech so you find the subplot, and the playlists, and the science behind it all. 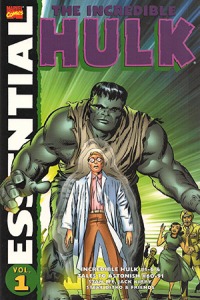 This collects Incredible Hulk 1-6 and Tales To Astonish 60-91, beginning in May 1962. I enjoyed it immensely, and somewhat unexpectedly, much as I enjoyed reading Captain America — and the similar trials and tribulations of the early years of a character’s introduction into the comic universe. Perhaps because what I love most is what they reveal about the process of creation, the twists and turns the superhero takes in the collective hands of each team, and the breakneck pace at which these twists and turns happen issue by issue because as good hacks really good at what they do, they never had time to slow down or think too clearly. They wrote really fast, spun out every idea to see how it worked, and if it didn’t they scrapped it and started again.

You get the sense they loved most every minute.

But with the coming of dawn, the thing that was the Hulk, vanished, and Bruce Banner returned to normal, knowing that he was destined forever to be two people — by day, a mild-mannered intellectual–but by night, the most dangerous menace the world had ever known!

I love the exclamation points, they are everywhere. I love the fact that Bruce Banner once upon a time changed into the Hulk only at night — it is only gradually that his anger becomes the trigger. He keeps getting hit with those gamma rays you see, and the plot keeps requiring different methods of change, different triggers. For a while it was just the rays themselves. And Bruce Banner complies with it all, goes with the flow because he never has a second to think, he is too busy fighting amazing creatures, discontented men, powerful aliens and super spies. You see him go from one thing to the next before he gradually begins to settle down into the character you thought you knew.

I don’t know what could be cooler than that. You almost don’t want him to settle. The constant creation and re-creation of character around a recognizable frame, this is what I find most awesome in comics. Stan Lee and Jack Kirby, what a team…

Then there are the antics — I don’t know why this stunt on a teeter-board with all the bad guys apparently poised on one end made me quite so very happy, but it did:

Things like the the ‘world’s first nuclear absorbatron, it was built to absorb the impact of an atom bomb blast,’ or Hercules exclaiming ‘By the Zesty Zither of Zeus!’ also filled me with pure joy. As did the raw energy and movement of Jack Kirby’s drawings — the way the images are the equals of the words in driving forward the story. It’s funny too how the Hulk shifted one way and another in the hands of different artists, from almost-Frankenstein to my least favourite, where the Hulk is at his most monkeyish. But that didn’t last for long and I can’t help but think it was Kirby taking a hand in again as he took over art direction for a while (but not the art itself).

Then there is this title page:

Beginning: A new chapter in the award-winning series that delicately poses the age-old question, “Can a green-skinned introvert, with anti-social tendencies, find happiness in a modern, materialistic society?”

These are the questions that matter….

Dinosaurs are being a little smarter this time aro

Bender as you have never seen him before

Load More...
Do NOT follow this link or you will be banned from the site!