I like how that sounds like particle physics. But no. It’s planning and cities and architecture again. Just capturing a few thoughts of McKenzie Wark’s on Constant Nieuwenhuys, along with New Babylon — the spectacular and SF nature of New Babylon. To return to later through Constant’s own words and work. Because look at this: 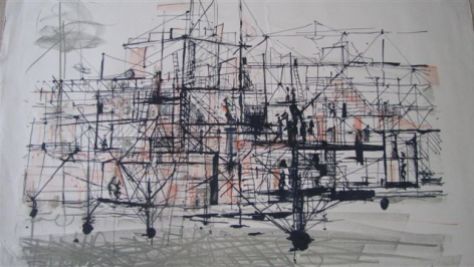 New Babylon’s beginnings (always I am bothered by these echoes of class and race, of doing for others):

It was Gallizio who set Constant on the path to his famous New Babylon project of unitary urbanism when the two of them were together in Alba. Gallizio, who was on the local town council, solved the problem of the town’s antipathy to visiting Romani, or Gypsies, by making some land he owned available for their camp. As Alice Becker-Ho writes, quoting from a 1569 text: “Their sojourns in particular villages are always sanctioned by the local squires or dignitaries.”27 Gallizio commissioned Constant to design a new kind of mobile architecture that might house them. Constant’s model was never built, but it set Constant on a new path. (162)

There follows an interesting juxtaposition — and makes Constant looks pretty good (though that often wasn’t too hard next to Trocchi to be honest, despite his occasional flash of brilliance). Still, this is hardly a viable infrastructure, though infrastructure it is.

For someone like Constant, the failure of Trocchi’s project sigma had less to do with Trocchi’s personal limitations than with objective necessity. The spectacle required a structural transformation which no mere passing of informations between disaffected hipsters could ever achieve. New Babylon placed its bets on changing the forms within which everyday life is experienced. Constant: “The culture of New Babylon does not result from isolated activities, from exceptional situations, but from the global activity of the whole world population, every human being engaged in a dynamic relation with his surroundings.”26 In an era that would become absorbed with the permutations of cultural superstructures, Constant’s obsession with infrastructure was a rare corrective. (310)

I like too the mention of van Eyck in this context, thinking about how houses connect and reflect the city and vice versa, I like thinking about thresholds. More to find.

The key architectural form for van Eyck is the threshold, which he imagines not as dividing one space from another, say public from private, but as connecting one possibility to another. Rather than an efficient division of space by function, he imagines a landscape of place, occasion, threshold, an architecture in which to tarry. As he writes in the Situationist Times, “a house is a tiny city, a city is a huge house.” The key is to think built form more in terms of time than space, a time that can’t be measured. For people who can linger there, the city enables times of full participation and rich experience. The city is when “associative awareness changes and extends perception, rendering it transparent and profound through memory and anticipation.” The urban malingerer becomes aware of duration. Here time acquires depth and subtlety, and “awareness of duration is as gratifying as awareness of the passing instant is oppressive. The former opens time, renders it transparent, whilst the latter closes time, rendering it impenetrable.”6 (315-316)

But back to New Babylon, and Marx, and this mad idea for a utopia:

“Automated factories would be underground, the surface level is for transport, while up above stretches a new landscape for play, a massive superstructure of linked sectors, within which everything is malleable, changeable at whim. Considered vertically, as an elevation, New Babylon makes literal Marx’s diagram of base and superstructure. Its airy sectors are literally superstructures, made possible by an infrastructure below ground where mechanical reproduction has abolished scarcity and freed all of time from necessity. It is an image of what Constant imagines the development of productive forces has made possible, but which the fetter of existing relations of production prevents from coming into being.” (319)

My favourite insight is this one, seeing connections rather than borders — just a different way of seeing a line, and one that we need to encourage as much as possible I think:

“Rather than lines that make borders, Constant’s experimental geography proposes lines that make connections. His vast aerial sectors, the size of little cities, link up and spread out over the landscape like reinforced-concrete crabgrass. (324)

It is interesting to continue my thoughts of yesterday on how our ancestors chose to shape the landscape to influence the lives of those who lived in it. I compare these drawings to the great stone circles of the neolithic and wonder how much we have changed, and just how much has remained the same.

Excerpt From: McKenzie Wark. “The Beach Beneath the Street: The Everday Life and Glorious Times of the Situationist International.” iBooks.

More on architecture, utopia and the situationists….

‘This is a machine for killing people’

Pictures of home and housing in Old Plovdiv

Red Vienna, A vision of Housing

The carvings of the stalls of St Katharine’s: Medieval iconography

4 thoughts on “Wark on the subject of Constant”

I know I complain about work sometimes but I ackno