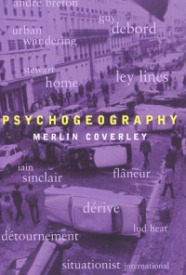 There’s so much I love about the approach and all of the authors in here but damn, are they white, male and privileged. I think Rebecca Solnit is the only woman to grace these pages, apart from the prostitutes and the beautiful women the surrealists stalked through the city… The one Situationist who did seem to actually try to practice psychogeography and write about it was forced to desist after several prison stays–apparently the police didn’t appreciate a Black Algerian immigrant name of Abdelhafid Khatib experiencing aimlessly in public spaces, especially after immigrant curfew time. What the hell were his comrades doing about that? I’d like to know.

But still, back to the thing itself. An initial description of psychogeography’s main characteristics

‘For psychogeography may usefully be viewed less as the product of a particular time and place than as the meeting point of a number of ideas and traditions with interwoven histories’. [11]

amongst this melange of of ideas, events and identities, a number of predominant characteristics can be reconised. The first and most prominent of these is the activity of walking. The wanderer, the stroller, the flaneur and the stalker… psychogeography also demonstrates a playful sense of provocation and trickery…seeks to overcome the processes of ‘banalisation’ by which the everyday experience of our surroundings becomes one of drab monotony…a perception of the city as a site of mystery… [12-13]

Which leads to gothic representations, ‘a focus on crime, poverty and death…’ I love the gothic with a deep love, but I don’t think the city as a site of mystery had to go this way–it’s just slumming, innit? Nor must it stay here really. It fits in with the wealthy male voyeurism, but if poor women started engaging in it, poverty would hardly be mysterious. They’d have to look deeper. A working class gothic, new strands of mystery, and most exciting at all, a kind of desire that has nothing to do with exploitative johns…

The book opens with literature, those inspiring psychogeography as we know it today: Defoe, Blake, de Quincy, Poe, Machen, Stevenson. Watkins’s work on ley lines. Walter Benjamin, Louis Aragon and Andre Breton, poets Rimbaud and Baudelaire. Today of course, it has been brought into the present by Ballard, Iain Sinclair, Stewart Home, Peter Ackroyd, and the films of Patrick Keillor. Coverley writes:

‘the programmatic approach of social theorists and geographers is in this instance unable to accurately refect the imaginative reworking of the environment that has been conducted so successfully by those writers whose works celebrate contemporary London. [25]

For Machen it is a freeing of the self from all geographical and historical markers, an adventure through the unknown. But at times it becomes Sinclairs delving deep deep into history, or Ackroyd’s circular theories of geographical convergences. You have Poe’s creation of a new urban type in The Man of the Crowd as cited by Benjamin and Baudelaire – ‘an isolated and estranged figure who is both a man of the crowd and a detached observer of it and, as such, the avatar of the modern city’. [60]

I was rather disappointed by the schoolboy idiocies of Potlatch and the lettrists, but then it gets a little more interesting, from De Bord’s ‘Introduction to a Critique of Urban Geography’, 1955:

The word psychogeography, suggested by an illiterate Kabyle as a general term for the phenomena a few of us were investigating around the summer of 1953, is not too inappropriate. It does not contradict the materialist perspective of the conditioning of life and thought by objective nature. Geography, for example, deals with the determinant action of general natural forces, such as soil composition or climatic conditions, on the economic structures of a society, and thus on the corresponding conception that such a society can have of the world. Psychogeography could set for itself the study of the precise laws and specific effects of the geographical environment, consciously organized or not, on the emotions and behavior of individuals. The adjective psychogeographical, retaining a rather pleasing vagueness, can thus be applied to the findings arrived at by this type of investigation, to their influence on human feelings, and even more generally to any situation or conduct that seems to reflect the same spirit of discovery.

Taken up with the situationists, there is no mention of Lefebvre where I thought there would be. They define psychogeography as ‘The study of the specific effects of the geographical environment, conspicuously organised or not, on the emotions and behaviour of individuals. [93] The invented the derive: A mode of experimental behaviour linked to the conditions of urban society: a technique of transient passage through varied ambiences. Also used to designate a specific period of continuous deriving’ [93] And the detournement: The integration of present or past artistic production into a superior construction of a milieu.

Here the theoretical grounding, carried on by Vaneigem and de Certeau. And the final chapter on rehashing some of the awesomeness being produced about London. And it is awesome. But still, so white, so male, and what is a movement if it is only produced in two cities? Surely it must lie beyond, surely there are walkers and writers around the globe. I have a lot of questions, but for my first foray into what psychogeography actually is after hearing the term kicked about, this is quite all right.